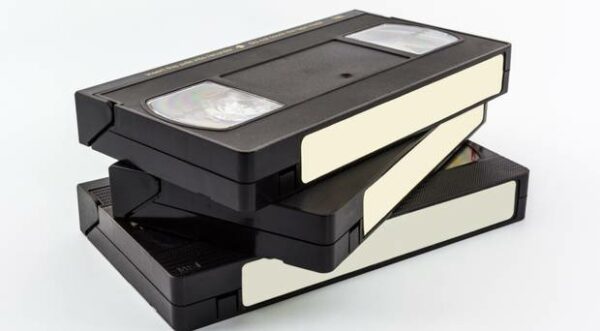 I recently watched several old VHS tapes with recordings of the family on them and cried more than a few times as memories of moments gone by came rushing back.

Some of these recordings were from the family vacations my wife and I took our son and daughter on, while others showed us doing different activities with them. And some were of the kid’s birthday parties and family get-togethers my wife loved to have.

I saw happy people laughing and having fun while being the cameraman and making comments that I thought were funny, but I’m sure some people didn’t. And I saw myself in the videos as well.

The recordings were from an 8 mm camcorder I bought in 1993, and even with poor picture quality due to time and other factors, they were still fun to watch. Well mostly fun to watch.

The recordings I later transferred to VHS tapes show moments from September of 1993 to New Year’s Day 2000. But the first two and half years are from my drinking days. Vacations where I was clearly buzzed on the boardwalk. Stuff I did with the kids, like making funny videos, where drinking beer was also involved. (Just me, not the kids.) And the birthday parties and family events, where I made sure alcohol was on hand for the adults.

One of these videos, recorded in January of 1996, stuck out though because it involves my children and was recorded just four months before I quit drinking for good.

I had been drinking for over 18 years and was very unhappy at that time, plus I didn’t have a clue what life was about. But the answer to my unhappiness was being recorded yet again, as I drank instead of truly enjoying moments like this with my kids.

I cried at times while watching it. And it made me wish I had quit drinking much sooner.

Although the video shows a mix of fun, happiness, laughter, and togetherness, it also shows the behaviors of a man who thinks he’s being a good dad, but sadly, doesn’t have any idea what being one is all about.

Besides my obvious drinking in it. (I take a few sips of beer on film and make a joke about it each time.) The fun we were having, while not bad in any way, clearly demonstrates the sometimes subtle and hidden dysfunction within a family that a non-stereotypical drunk like myself can create. (I didn’t drink every day. Still had a job, a home, and some money in the bank.)

What the video doesn’t show, however, is what contributed to the dysfunction, and to my drinking. The fears and insecurities I had all my life.

Here I am in this video, 36 years old, and you would think I was more of a funny friend than a father to my children. My immature behaviors and sometimes unfiltered words are anything but role model quality. And although no one would shudder or think what they saw was awful. I saw a lack of emotional growth in myself and someone who used alcohol to face their fears and insecurities.

I don’t beat myself up over my past anymore, and even through my tears, I knew I was at least trying to be a good father back then. But I simply was not capable of being a better one. (Thankfully they had a wonderful mother who knew how to be a parent.)

I wrote about my childhood in my book, which was far worse than anything my kids ever experienced. But I know my mom and dad tried to be good parents, and I watched them change for the better over the years. Which brings me to the video recordings after I quit drinking.

As I remained sober, first through Alcoholics Anonymous and then on my own, improving on myself contributed to becoming a better parent and spouse, and certainly my long-term sobriety.

Actually, there is another video that stands out that was recorded in August of 1996. It’s the first family vacation we went on after I stopped drinking. Like the other one, it shows a mix of fun, happiness, laughter, and togetherness, but doesn’t show the fears and insecurities I had.

What’s different, though, is that in this one, I was ready to face life sober and finally become the person, father, and husband I never knew how to be.